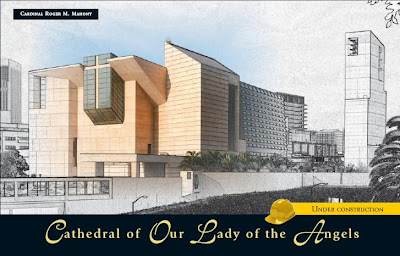 Once construction began on our new Cathedral in January of 1998, I visited the site almost every week and took a roll or two of photos--over 9,000 photos in all.
A selection was made of those photos, and a book of 232 pages resulted.
The book is about 90% photos with brief captions to describe the building activity. Most people are unaware of the complexity of a structure as large as the Cathedral of Our Lady of the Angels.
The book is available at the Cathedral Gift Shop.

Labels: Building Activity, Cathedral of Our Lady of the Angels, Construction Photos

You can't visit Rome without trying their terrific pizza! My favorite is the really thin pizza cooked in a wood-fired oven. Nothing like it! Our Los Angeles pizzas tend to be way too thick--too much dough. The thin ones pick up the wood cooked flavor nicely!

The place is called La Sacrestia--The Sacristy! That's the large room where the priests vest for Mass, and all of the liturgical items are stored. And it's on Via del Seminario--Seminary Road! Good friendly service.

My favorite is the one with fresh sliced mushrooms as the main topping!

Really easy to find--just to the left of the Pantheon in the heart of old Rome. As you are facing the front of the Pantheon, via del Seminario is to your left. Just a few doors down you will find La Sacrestia.

After a great pizza with some fine Italian wine, allow yourself some riposo time--a little nap!
Posted by Cardinal Roger M. Mahony: at 8:42 AM 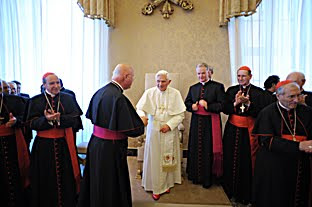