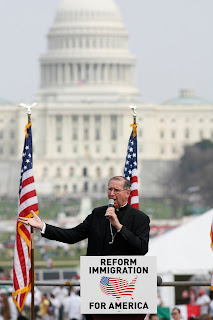 On Sunday March 21, some 200,000 people gathered in Washington DC for a Rally in favor of immigration reform legislation.

This Rally was historic because it occurred during the final hours of debate about health care reform. Yet, these thousands of people came to the Capitol Mall to show their support for all of our immigrant brothers and sisters who are seeking a legal path to legal residency here in our country.

It was impressive to see people from almost all the States of the Union here to urge President Obama and the Congress to enact comprehensive immigration reform.

Health care reform passed on Sunday night, and brought millions of people out of the shadows of living without health care coverage. We have reached out to them precisely to include them fully into American life and protections.

Now we need to do the same thing with our millions of immigrants who are living in the shadows of our society but without protections and guarantees--because they do not yet possess legal status. We need to devote ourselves to bring about a comprehensive bill which will bring them into full participation in the life of our country.

I am encouraged by the words and promises of President Obama and the Senate leadership:

In his State of the Union speech to Congress January 27, President Obama reaffirmed his Administration’s commitment to immigration reform, calling on Congress to “continue the work of fixing our broken immigration system to secure our borders, enforce our laws and ensure that everyone who plays by the rules can contribute to our economy and enrich our nation.” In comments made subsequent to the President’s speech, Senate Majority Leader Harry Reid (D-NV) restated his commitment to moving immigration reform this year: “It is something we are committed to do. And we will do it as soon as we can.” Senator Charles Schumer (D-NY) offered that he was making “good progress” in negotiating a bipartisan bill with Senator Lindsey Graham (R-SC).

For further information and ways you can participate, please visit the website for Justice for Immigrants: www.justiceforimmigrants.org

I am hopeful that all of us who are Catholics can move together towards an immigration reform that will bring respect, hope, and a new future for the millions who work so hard to make our country so great.

God's blessings be upon all of us!
Photos: CNS/Nancy Wiechec
Posted by Cardinal Roger M. Mahony: at 5:34 PM