BESTOWAL of the PALLIUM

Today, the Feast of Saints Peter and Paul, a grand celebration of the Holy Eucharist took place in St. Peter's Basilica in Rome! Our Holy Father, Pope Benedict XVI, celebrated the 60th Anniversary of his Ordination to the Priesthood, as well as the Bestowal of the Pallium upon 40 new Archbishops from throughout the world. 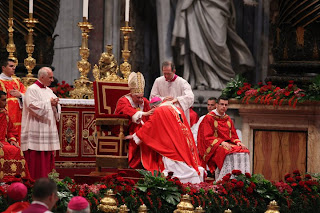 Those of us in Los Angeles were particularly blessed since our Archbishop, the Most Reverend Jose H. Gomez, received his Pallium as the Metropolitan Archbishop of Los Angeles. He was accompanied by all of the Auxiliary Bishops, many priests, Religious, and lay men and women.

The Holy Father's homily focused upon the Gospel passage which was proclaimed 60 years ago at his own Ordination: "I no longer call you servants, but friends" (cf. John 15:15). He explained to us: "Friendship is not just about knowing someone, it is above all a communion of the will. It means that my will grows into ever greater conformity with his will. For his will is not something external and foreign to me, something to which I more or less willingly submit or else refuse to submit. No, in friendship, my will grows together with his will, and his will becomes mine: this is how I become truly myself."

This gradual blending of our own will with that of Jesus Christ is a daily task for us as disciples of Jesus, and the fullness of our friendship occurs when we are with Jesus in the Kingdom of Heaven.

Speaking to the new Archbishops, Pope Benedict highlighted three aspects of receiving the Pallium. First, "It may remind us in the first instance of Christ's easy yoke that is laid upon us (cf. Matthew 11:29f). Christ's yoke is identical with friendship."

Second, "Thus it reminds us of the Shepherd who himself became a lamb, out of love for us. It reminds us of Christ, who set out through the mountains and the deserts, in which his lamb, humanity, had strayed. It reminds us of him who took the lamb--humanity--me--upon his shoulders, in order to carry me home."

Third, "Finally the Pallium also means quite concretely the communion of the shepherds of the Church with Peter and with his successors--it means that we must be shepherds for unity and in unity, and that it is only in the unity represented by Peter that we truly lead people to Christ."

I recommend that you pray over the entire homily which can be found at the new Vatican news site: http://www.news.va/

Truly, today June 29, has been a great day of drawing closer to Jesus Christ and to feeling deeply the bonds which unite all of us around the world as members of the Body of Christ!
Posted by Cardinal Roger M. Mahony: at 5:46 AM