MASS and VISIT with POPE FRANCIS

Today, Thursday, January 16, it was a great grace to concelebrate Mass with Pope Francis in the Chapel at Domus Sanctae Martae, and then later in the morning, to have a private Audience with him.

The MASS          Each weekday morning Pope Francis celebrates Mass at 7:00 AM in the Chapel of his residence, Domus Sanctae Martae.  Today, Cardinal Carlos Amigo Vallejo, OFM, the Archbishop Emeritus of Seville in Spain, also concelebrated, together with a group of Italian priests. 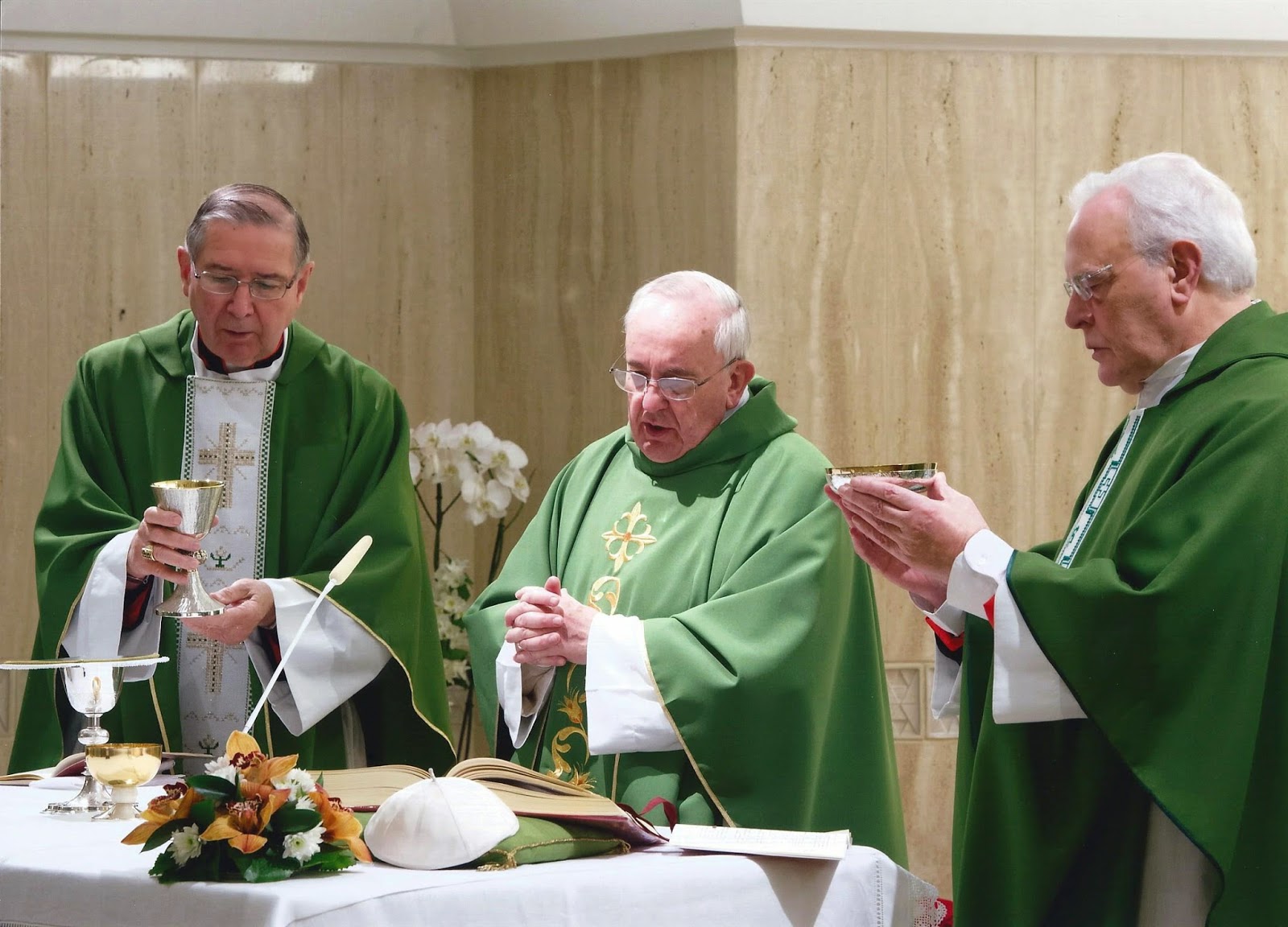 It is so evident that Pope Francis is a man of prayer, a holy Successor to St. Peter.  It is remarkable how he is able to reflect on the Scriptures of the day without any notes or text--but flowing directly from his prayer life and from his heart. Vatican Radio provided this synthesis of the Pope's homily:

"Scandals in the Church happen because there is no living relationship with God and His Word.  Thus, corrupt priests, instead of giving the Bread of Life, give a poisoned meal to the holy people of God.

Commenting on the day's reading and responsorial Psalm which recount the crushing defeat of the Israelites by the Philistines, the Pope notes that the people of God at that time had forsaken the Lord.  It was said that the Word of God was 'uncommon' at that time.  The old priest Eli was 'lukewarm' and his sons 'corrupt; they frightened the people and beat them with sticks.'  In their battle against the Philistines, the Israelites brought with them the Ark of the Covenant, but as something 'magical,' 'something external.'  And they are defeated: the Ark is taken from them by their enemies.  There is no true faith in God, in His real presence in life. 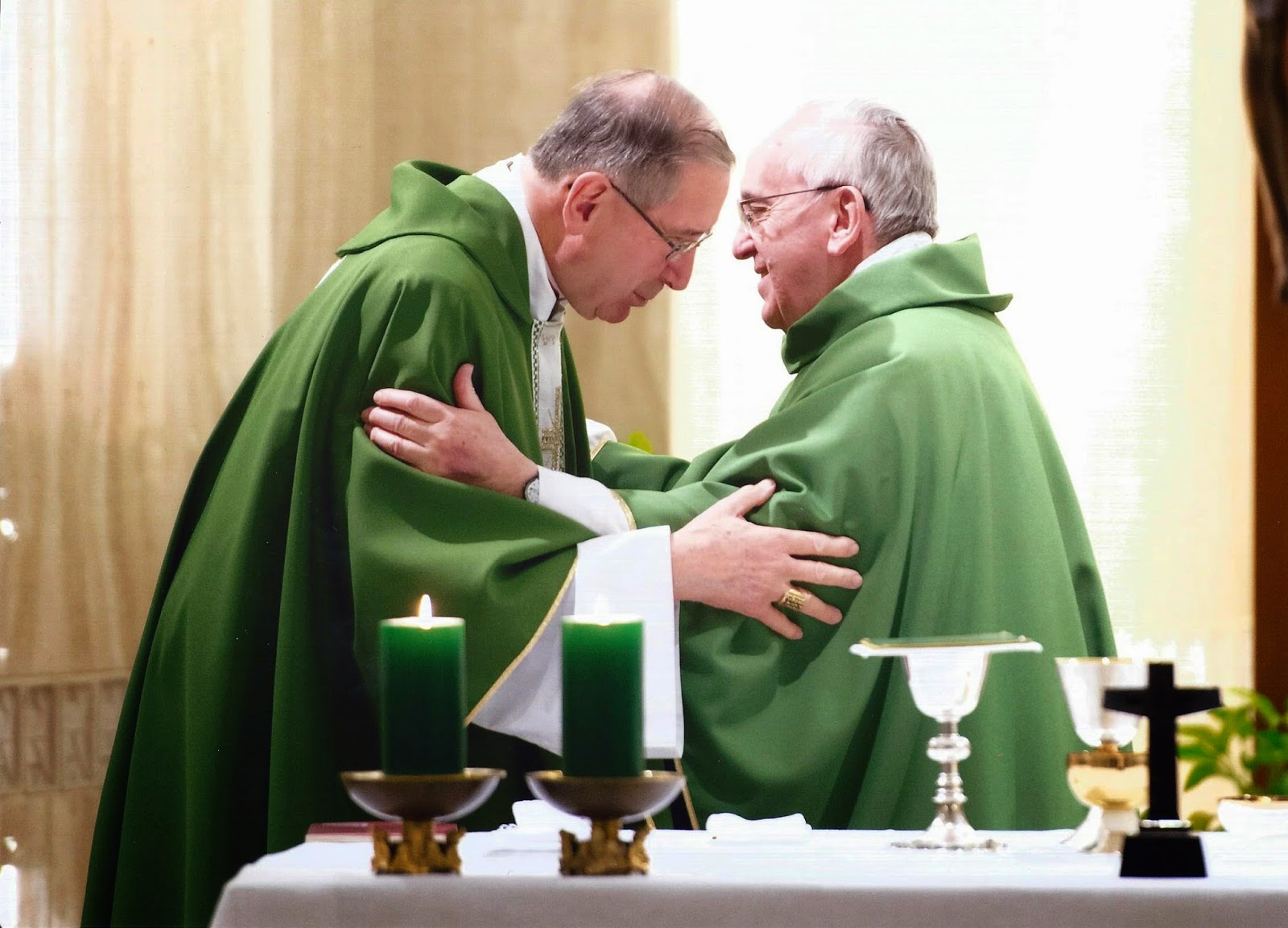 "This passage of Scripture," the Pope says, "makes us think about what sort of relationship we have with God, with the Word of God:  is it a formal relationship?  Is it a distant relationship?  The Word of God enters into our hearts, changes our hearts.  Does it have this power or not?  Is it a formal relationship?  But the heart is closed to that Word!  It leads us to think of the so many defeats of the Church, so many defeats of God's people simply because they do not hear the Lord, do not seek the Lord, do not allow themselves to be sought by the Lord!  And then after a tragedy, the prayer, this one:  'But, Lord, what happened?  You have made us the scorn of our neighbors.  The scorn and derision of those around us.  You have made us the laughing stock among nations!  All the nations shake their heads about us.'

And of the scandals in the Church, Pope Francis said:

"But are we ashamed?  So many scandals that I do not want to mention individually, but all of us know....We know where they are!  Scandals, some who charged a lot of money....The shame of the Church!  But are we all ashamed of those scandals, of those failings of priests, bishops, laity?  Where was the Word of God in those scandals; where was the Word of God in those men and in those women?  They did not have a relationship with God!  They had a position in the Church, a position of power, even of comfort.  But the Word of God, no!  'But I wear a medal, I carry the Cross.'  Yes, just as those bore the Ark!  Without the living relationship with God and the Word of God!  I am reminded of the words of Jesus about those for whom scandals come ... And here the scandal hit:  bringing decay to the people of God, including the weakness and corruption of priests."

Pope Francis concluded his homily, turning his thoughts to the people of God, saying:

"Poor people!  We do not give the Bread of Life to eat; we do give--in those cases--the bread of Truth!  And many times, we even offer a poisoned meal!  Awaken!  Why do you sleep, Lord?  Let this be our prayer!  Awaken!  Do not reject us forever!  Why do you hide your face?  Why do you forget our affliction and oppression?  We ask the Lord never to forget the Word of God, which is alive, so that it enters into our hearts and to never forget the holy people faithful to God who ask us to nourish and strengthen them."


After Mass, the Holy Father greeted the priests and the lay people who had attended the Mass.

The AUDIENCE          Later in the morning I had the great privilege of a private Audience with Pope Francis.  Since my Italian is not fluent, we spoke in Spanish.  Most of our conversation focused on the plight of migrants, immigrants, and refugees around the world.  I recounted for the Pope that in 2012, during our last Ad Limina visit, Pope Benedict had requested a proposal on how to address the plight of these many peoples on the move.  I had told Pope Benedict that the last Papal document on the pastoral care of peoples on the move was some 60 years ago--it was entitled Exsul Familia issued by Pope Pius XII.  The Bishops of our Region had requested a possible updated pronouncement from the Holy Father. 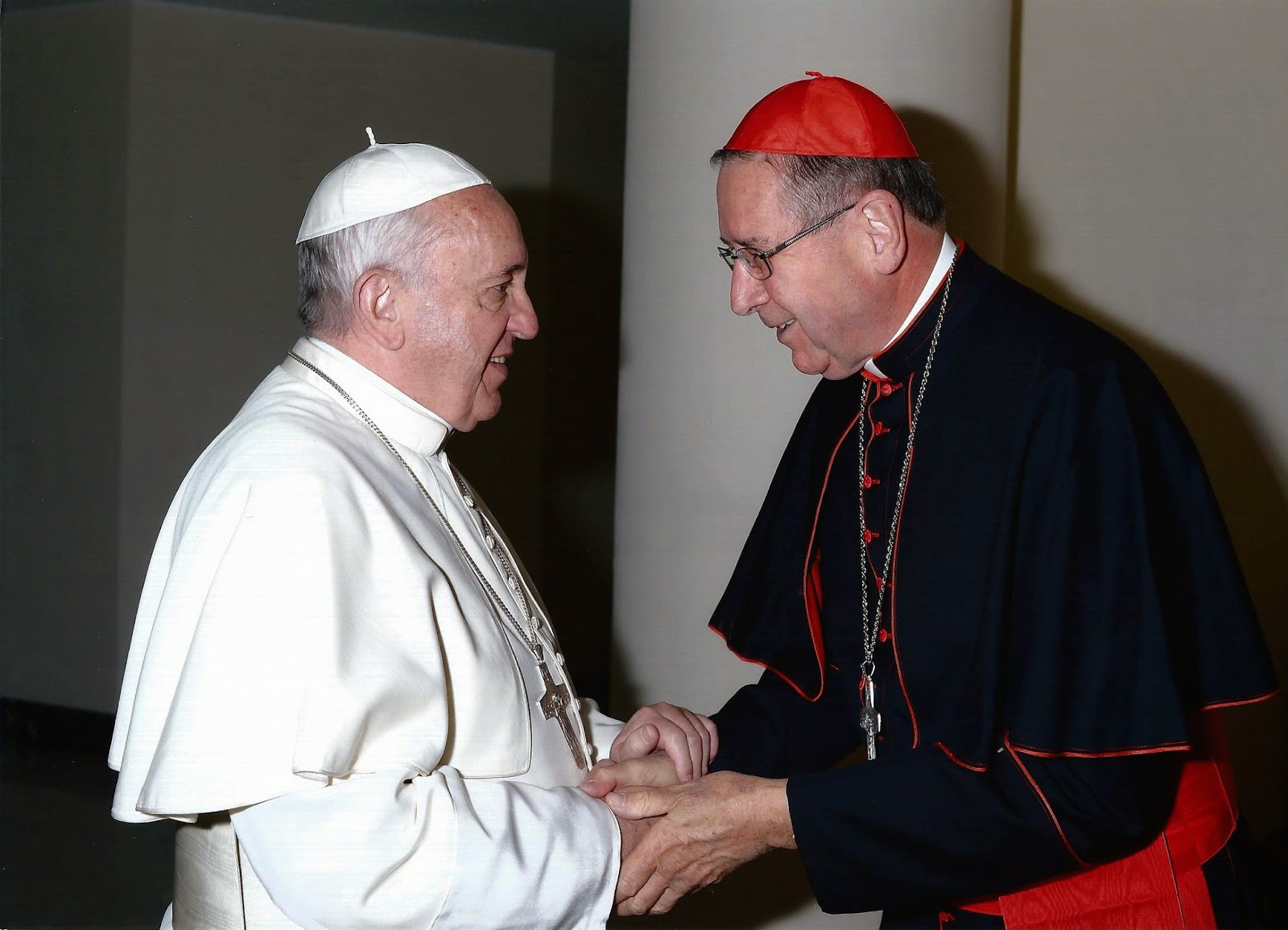 I gave Pope Francis some materials about the reality of migrants, immigrants, and refugees in our day.  Back in 1952 when Pope Pius XII issued his document there were about 50 million people on the move--many as a result of the Second World War.  Today, there are some 425 million people on the move, suffering from so many human problems--many related to wars, terrorism, political instability, and the search for economic stability for their families.

Pope Francis expressed an interest in this entire matter, and pointed out that in Evangelii Gaudium he had made reference to some of these issues.  He also saw the need for a possible new document dealing with today's vast numbers of peoples on the move. 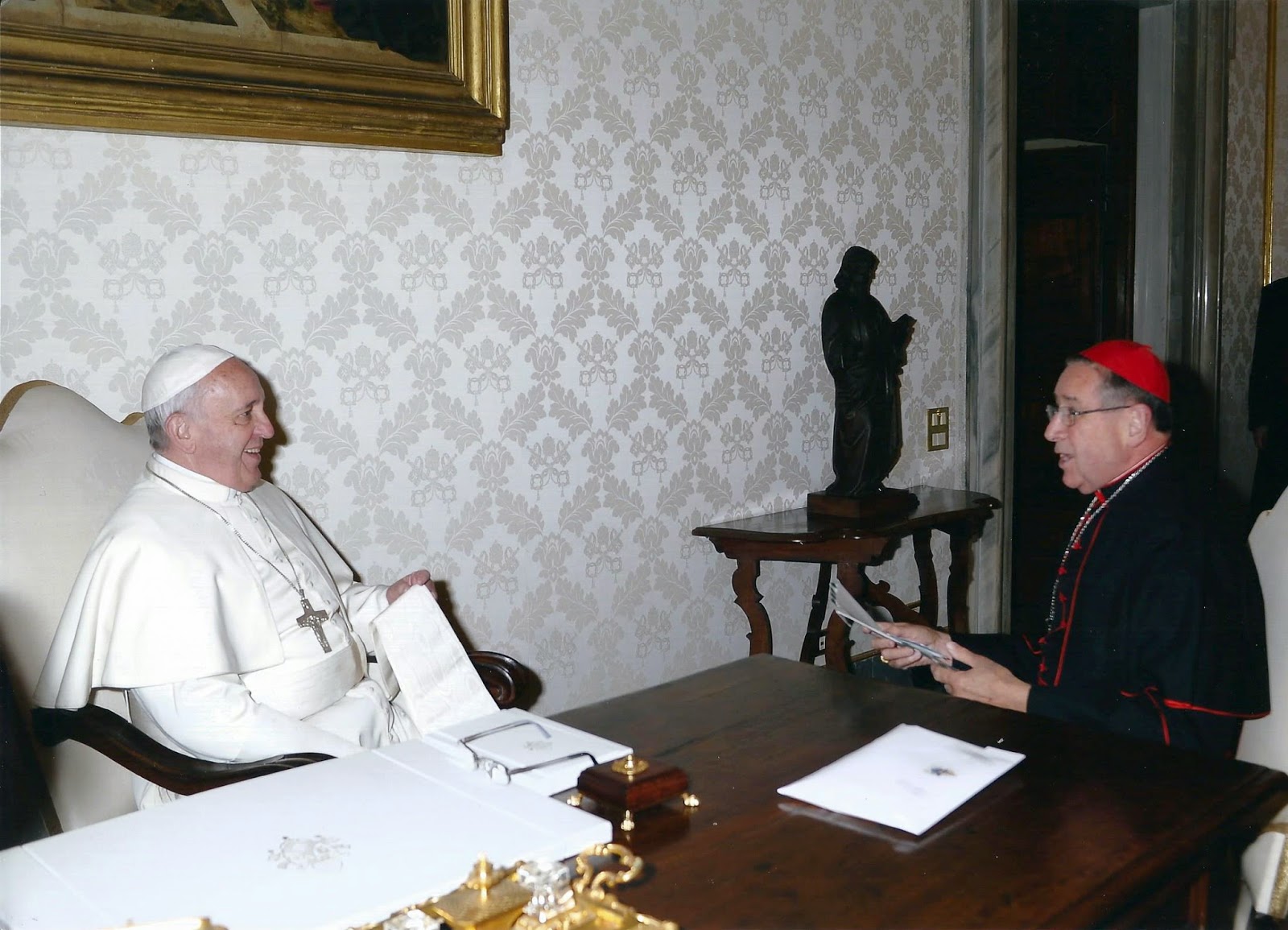 Pope Francis also emphasized the need for all of us, disciples of Jesus, to be ever more attentive to the needs of the poor and disadvantaged in our midst.

He made it clear that he intends to keep bringing the dreadful plight of so many millions of people to the attention of the world and to all of us in the Church.


[Photos courtesy of Servizio Fotografico of the L'Osservatore Romano Publications, 00120 Vatican City]
Posted by Cardinal Roger M. Mahony: at 2:36 AM