On Sunday, September 4, 2016 Mother Teresa of Calcutta will be placed in the Church's official Book of Saints.

However, for all of us around the world, she has been a "saint" for many decades. 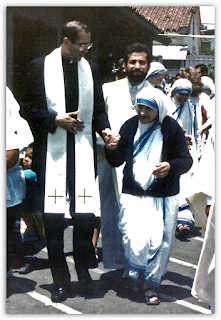 Her willingness to go out onto the streets of Calcutta and to bring home to her convert the aged, the dying, the gravely ill, people "thrown away" by society.

She always explained so simply:  "There is no mystery to what my Sisters and I do.  We go out onto the streets, and see in the faces of the miserable and destitute, the face of Jesus.  We just pick up Jesus and take him home with us."

Her heroic following of Jesus in the Gospels is the foundation of her life and ministry.  Like Jesus, though, she knew how important it was to spend time in prayer with the Father.  That's why she and her Community devote many hours each day in prayer.  Prayer keeps us linked to Father, Son and Holy Spirit.

The first members of her Missionaries of Charity we received in Los Angeles were her Brothers.  Their ministry was across downtown Los Angeles, and they reached out to young adults who were on the streets.  Many were undocumented, others were suffering with addictions, still others were abandoned.  They saw the face of Jesus in each one, and following Mother's guidance and witness, they offered to serve them.

The second group of her Missionaries were her active Sisters.  They established their ministry in a former convent in Lynwood, and focused their ministry upon single mothers with young children, pregnant women on the streets, those most in need.

The third group were her Contemplative Sisters who live in a small house in Alhambra, and devote themselves to praying for the spiritual and pastoral success of all the works of their apostolates around the world, as well as our apostolates here in the Archdiocese of Los Angeles. 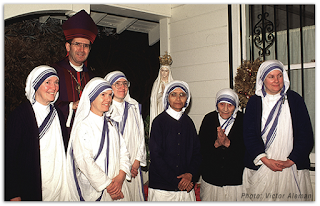 After the death of Mother Teresa, I wrote to Pope John Paul II to ask him to begin the process towards canonization without waiting the customary five years following death.  This was granted, and her path towards the Church's official recognition that she lived out her life with heroic virtue was assured.