Please meet Samer, his wife Rasha, and their four children--two sons and two daughters.  They are now in a transition apartment in Athens operated by CRS and Caritas Greece, and hopefully, by the end of March, they will be going to their permanent home:  Switzerland.  The Swiss Embassy has confirmed with them their final destination, and they are in the process of that last leg of a long and harrowing journey.


Although they are very pleased to be in Athens on their way to Switzerland and a new life, the journey has been long, painful, and harrowing.  They are from Aleppo in Syria and left when confronted by an armed militia in their part of the city: three choices--join their militia as a fighter, remain and have all utilities, job, and food removed, or finally, be shot.  Samer gathered up his family and they fled in the night from Aleppo, working their way into Turkey.  From there they got a boat from Turkey over the sea into Greece.  They were actually saved by the Greek navy when their small boat began sinking.

They were then in many temporary camps attempting to reach the border with Serbia or Bulgaria in an effort to reach Germany or Sweden--two countries open to taking refugees.  On various trips to the border they found it closed, and had to retreat.

On one dreadful attempt they had gone a month and a half without a bath.  Finally, two Greek women came to their camp and offered to have them come to their house where they could all bathe and feel human once again.  They said they would never in their lifetime forget this gesture of kindness and goodness.

Once approved for relocation out of Greece, they were given a temporary apartment in a building leased by CRS and Caritas Greece.  The building can accommodate 11 families and up to 63 total persons.  Compared to all the places they have lived over the years, the apartment seems like a "palace" to them.  They are so grateful to everyone who has helped bring their journey to a conclusion in such a positive and meaningful way.

Back in Syria Samer was a tailor and is hoping to resume his profession in Switzerland--most likely working for a clothing store there.  He knows some Syrian refugees from Aleppo now in Switzerland, and he looks forward to connecting with them soon. 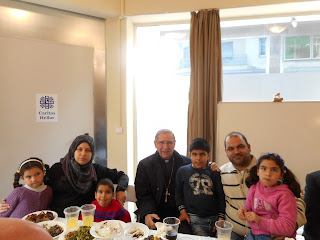 Please continue your support of CRS, especially with the Lent Rice Bowl program, so that many more refugee families can reach a final destination where they are no longer in danger of being killed, persecuted, or threatened.

The journey is long and arduous for so many refugee families and families of displaced peoples in their own countries.  We are their life-line for the future.


{To support the wonderful work of CRS, please go to:   www.crs.org ]