Today we flew to Dire Dawa, about an hour southeast of Addis Ababa.  We first met with the staff of the Secretariat of the Eparchy of Dire Dawa.  The Catholic Secretariat operates all of the educational, social, and health projects across this very large Eparchy.

We met the staff and enjoyed a traditional coffee ceremony with them.  Ethiopian coffee is of very high quality and drank all acround the world.  In addition, they prepare a special celebration bread which is broken up into pieces and shared by all who are gathered.

We then drove through more mountainous lands with people living in villages at various elevations.  The main highway is the one taken from Ethiopia to Djibouti.  Since Ethiopia has no link to an ocean, all cargo coming by sea enters through the port of Djibouti.  We saw many large Containers being hauled in both directions, as well as fuel and other products. 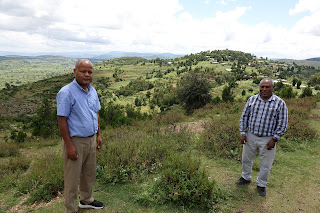 We then drove to an Internally Displaced Persons [IDP] camp in Deder.  These people have been displaced because of conflicts between different groups in various places of Ethiopia.  One example is the class between local farms in an area with roving herdsmen who come into their area and allow their herds to eat crops.  These conflicts result in people having to flee.

Approximately 300 persons live in such tin shelters, with about 8,000 such displaced persons around the country.

In this mountainous region, CRS has developed a very creative project to obtain good, clean water and make it available to people at local water stations.  Before, they would spend hours per day going in search of water.

One example of this project consists of a well down in the valley floor where there is abundant water below the surface.  This water is then pumped uphill about 2.5 miles to various levels of the mountain into storage tanks.  One large water tank holds 32,000 gallons.  Then, water lines descend down to 12 water points, and 6 water points for displaced persons' camps.

This means that some 45,000 people benefit from these water projects in and around this region.  The water points are managed by local committees.  So far, these pumps use diesel or electricity to pump the water.  Possibly in the future solar panels will replace them.

No other project has had such an enormous, multiplier effect upon the local populations.  Available good and clean water changes every aspect of local life:  little time spent in finding water, fewer illnesses because of the high quality of the water, better water for bathing and washing, and water for more crops.

On our return journey, stopped at one of the food distribution warehouses operated by CRS across the country.  These warehouses contain basically food products such as grains, and they are distributed as needed to various communities near and around these storage facilities.  Having the food near at hand is a great blessing for the people in need since little time is lost in transporting the food.

We then flew back to Addis Ababa after a most fruitful visit to this section of Ethiopia.

PLEASE DONATE TO HELP CRS WITH THESE PROJECTS:  www.crs.org