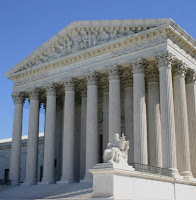 Today's ruling by the U.S. Supreme Court on four provisions of Arizona's immigration law [S.B. 1070] gives some measure of relief for immigtrants in our country, but still leaves them at risk because one section of 1070 remains in place--at least for now.

The three sections of 1070 struck down by the Supreme Court are the folllowing:

Section 5(C):  "makes it a misdemeanor for an unauthorized alien to seek or engage in work in the State [Arizona]"

Section 6:  "authorizes state and local officers to arrest without a warrant a person 'the officer has probably cause to believe...has committed any public offense that makes the person removable from the United States"

Upheld by the Court is section 2(B):  "requires officers conducting a stop, detention, or arrest to make efforts, in some circumstances, to verify the person's immigration status with the Federal Government"

Why should immigrants across the nation still be concerned?  Because the very real threat of racial profiling of immigrants remains.  The decision leaves enormous discretion in the hands of the law enforcement officers who are making a stop of a person.  How is an officer to make a clear and unbiased determination in the Arizona law:  "Section 2(B) of S.B. 1070 requires state officers to make a 'reasonable attempt...to determine the immigration status' of any person they stop, detain, or arrest on some other legitimate basis if 'reasonable suspicion exists that the person is an alien and is unlawfully present in the United States."

How is "reasonable suspicion" to be interpreted?  Color of skin?  Primary language?  Certain physical features?  How long can a person be detained while state officers seek immigration status reports from the Federal Government?

This is at the heart of the challenge to S.B. 1070 by the United States Conference of Catholic Bishops in our Amicus Curiae Brief.

Fortunately, the U.S. Supreme Court recognized these inherent dangers, and has agreed to allow Section 2(B) to go forward while implementation takes place:  "This opinion does not foreclose other preemption and constitutinal challenges to the law as interpreted and applied after it goes into effect."

I am hopeful that the Church and various immigration rights organizations will monitor the implementation of this law across Arizona--as well as in other States where the same provision is enacted.  Specific examples of the suspicion of racial profiling need to be documented so that any needed preemption and constitutional challenges can take place.

If I were a person of dark skin who spoke another language as my primary language, I would still be fearful of being stopped and detained because of what some might term "reasonable suspicion."

This U.S. Supreme Court decision continues to underline our need for comprehensive immigration reform so that these piecemeal approaches can be avoided, and at long last, all immigrants in our country will be clear about their status and about their options to obtain legal status.