In the past several months the Catholic Church has been alerting everyone in the nation to the great new dangers affecting religious freedom:  The government determining what constitutes a Church, who belongs, and what services they may or may not offer, and to whom.

The end of June leading to the 4th of July we Catholics celebrated a "Fortnight for Freedom" to highlight the present dangers to our constitutional religious freedoms, and to point out how the federal government increasingly attempts to restrict those freedoms, as well as to regulate how Churches live out their freedoms.

The latest visible and glaring example of people in government punishing people for holding differing beliefs from government leaders focuses on a chicken sandwich. 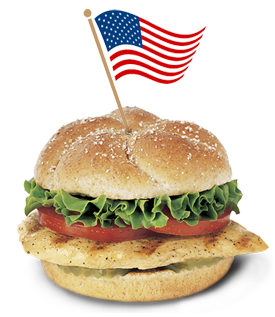 Chick-fil-A is a national restaurant chain which specializes in chicken sandwiches, other chicken foods, as well as various sides, drinks, and desserts.

Chick-fil-A president Dan Cathy has consistently backed "the biblical definition of a family," and his foundation has contributed to groups working to maintain the traditional definition of a marriage--one man and one woman.  He later added, "I think we are inviting God's judgment on our nation when we shake our fist at him and say, 'We know better than you as to what constitutes a marriage'."

Sounds to me like speech from a son of God and speech guaranteed by the First Amendment to our Constitution.

But three liberal Mayors not only attacked Cathy's beliefs and words, but they threatened to block any Chick-fil-A restaurants from being opened in their cities.  Those threats were not veiled.

Mayor Rahm Emanuel of Chicago stated "Chick-fil-A values are not Chicago values," and threatened to make it impossible for Cathy to open any more stores in Chicago.  He's probably too late.  There are 19 stores across Illinois, and several are on or near college and university campuses.

Mayor Thomas Menino of Boston offered this:  "There is no place for discrimination on Boston's Freedom Trail and no place for your company alongside it."  Massachusetts has two stores, and I suspect that this outrageous comment will prompt new ones to open.  How a Mayor could so violate the true meaning of the historical basis of the Freedom Trail is staggering.  The Freedom Trail takes visitors past the many important places in the development of our freedoms as Americans.  Can one walk along such locations as the Shaw Memorial or the Park Street Church in Boston and not realize that such places stand for the very freedoms Mr. Cathy is expressing?

Mayor Edwin Lee of San Francisco tweeted:  "Closest Chick-fil-A to San Francisco is 40 miles away "and I strongly recommend that they not try to come any closer."  California has 59 stores, Mayor Lee, and more are in the works.

Mayor Richard Bloomberg of New York brought some constitutional sense to these outrageous remarks mocking the faith beliefs of Mr. Cathy.  He said:  "...trampling on the freedom to marry whoever you want is exactly the same as trampling on your freedom to open a store."  Although he favors gay marriage, nonetheless, he realizes that basic freedoms are at stake.

New York lawyer Richard Socarides, a former Clinton White House adviser on gay rights, said Bloomberg is right.  "Consumers can disagree with a company's corporate political position and decide not to spend money there, but the city cannot regulate speech by denying someone a permit to operate their business just because you disagree with their political beliefs."

Amen.  But there is more to the issue than political beliefs.  These are deeply held faith beliefs, and those beliefs have various values underpinning them.

Regarding marriage, the question is rather simple:  Is marriage of God's origin?  Or, is marriage of government origin?  We Catholics and many others of similar belief shout loudly that marriage is of God's origin, and we will never stop our efforts to maintain that understanding and practice of marriage in our broader society.
All Catholics, but especially Catholic business leaders, should be in the forefront of efforts to protect all religious liberties and freedoms across our nation.  Because as we have just seen, lots of folks out there are eager to punish us for clinging to and expressing our faith beliefs, values, and practices.  If government can "punish" a store owner for his faith beliefs and threaten to close his store because of those beliefs, then we are all in big trouble.
We as Catholics need to stand tall, know our faith beliefs, and proclaim those to the whole world in the name of Jesus Christ!