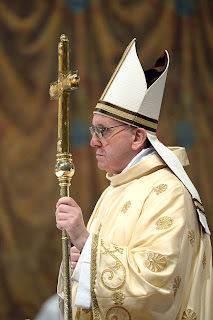 Now that Pope Frances has been elected, and has concluded his Mass of Inauguration in St. Peter's Square, the really difficult work awaits him.

Pope Frances knows well that one of the major themes during the ten General Congregations of the Cardinals prior to the Conclave was the reform of the Vatican Curia.  Reform will only take place with the appointment of top collaborators with the Pope--and soon.  The longer he waits, the greater the danger that the current leadership may feel that they will remain in their jobs and will function as in the past.  But the world's Cardinals want something else.

With the fresh new vigor of Pope Francis and his vision of a Church which is "poor and for the poor," and with far less bureaucracy, that will only happen if the upper leadership in the Vatican is changed.

Fortunately, there are many fine candidates around the world for the various positions which he needs to fill.  He will be well served if he calls upon a small group of Cardinals who serve as Archbishops of Dioceses around the world to advise him on his choices.  Most likely, his new appointees will not be men presently serving in the Vatican Curia, but men with a broad working knowledge of the Church world-wide and seasoned in their experience.

Recall his words during his March 19 homily:  "Let us never forget that authentic power is service...."  We can consider that criterion to be high on his list when he prays and consults others about his appointees.