WHY THE NAME "POPE FRANCIS"??

In an Address to journalists covering the election of Pope Francis, he explained how and why he chose the name "Pope Francis."  I am reprinting his words below which are a true vision and mission statement for the Church, and for his ministry as Successor to Peter: 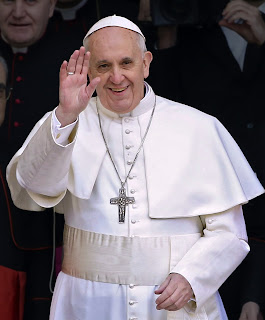 “Some people didn't know why the Bishop of Rome wanted to call himself 'Francis'. Some though of Francis Xavier, Francis de Sales, even Francis of Assisi. I will tell you the story.

At the election I had the archbishop emeritus of Sao Paulo next to me. He is also prefect emeritus of the Congregation for the Clergy, Cardinal Claudio Hummes [O.F.M.]: a dear, dear friend. When things were getting a little 'dangerous', he comforted me. And then, when the votes reached the two-thirds, there was the usual applause because the Pope had been elected. He hugged me and said: 'Do not forget the poor.'

Those words, that challenge, have galvanized my own life and ministry for the remaining time left to me on this earth:  Oh, how I wish for a Church that is poor and for the poor!"  For the Church to be poor means to possess very little--not wealth, not nobility, not reputation.  It means to live our lives as Jesus did in the loving service of others.  In southern California we have many people who are poor:  the homeless, the hungry, the abandoned, the victims of all types of abuse, the immigrants, the hopeless.  Like Jesus, we must seek out and be found with all of "the wrong people" so that we can bring God's love, forgiveness, and comfort to them.

I will pray over and ponder the Pope's challenge these coming days, and will accept this challenge as a personal mandate for my own continuing ministry.
Posted by Cardinal Roger M. Mahony: at 8:30 AM