Today our focus was on a huge problem around the world:  human trafficking.  Refugees are people who are fleeing wars, violence, oppression, hunger, and persecution.  The Middle East is filled with these people.

But there is another large group of people on the move and in dire conditions:  the victims of human trafficking.  Although this problem exists world-wide, we are experiencing it here in Lebanon.  The victims are people who have been brought to a country based on the promise of getting a job and living in service to others.  In most cases, these are young women hired to serve as domestic help for a family.

Technically, they have been employed under the protection of certain laws and regulations:  safe travel to the country where the work is located, a just monthly salary, room and board, clothing,
and other necessities.

But in practice, too many of these domestic help are taken advantage of, physically and even sexually abused, and kept as virtual captives in the homes where they work.  Often the employer takes their passport and other papers which might assist the person to leave.

Many receive far less than promised, and in general, their salary is based totally on how white their skins is.  We met women from Ethiopia who are dark, and they were given $150 per month; others from the Philippines who are lighter, might get $400.  The sole criteria:  how light their skin.

Many of these women flee from abusive homes and find themselves on the streets--alone and helpless.  The Lebanese government operates a Retention Center for such migrants, to which they are sent until their case can be sorted out and until they can arrange to go home.

One big catch:  the government provides very little money for the operation of the Retention Center. Instead, Caritas of Lebanon has stepped in and provides virtually everything for these people:  clothing, bedding, medical care, legal advocates, social workers, even basic food.  Caritas is the heart and soul of the Church's presence for these migrants caught up in the evil of human trafficking.

There are no photos of these migrants since the government allows no photos in the Retention Center.

We next visited a Safe House, also operated by Caritas Lebanon, which is located on the top floor of a building owned by the Church.  Here, exploited and abused women are free to come and to find a welcoming place.  Even though many are referred to the Safe House by the government, the location of the House is kept secret. 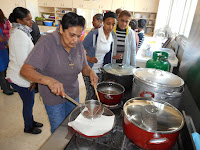 We were privileged to meet a large number of women desperate to escape the misery, lies, and manipulation which they experienced.

The women sometimes give birth while at the House, and the baby is welcomed and cared for.  Counseling services are a high priority since the women have been traumatized by so much exploitation and disrespect.  They are truly fragile. 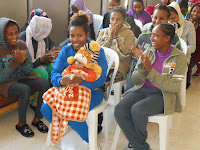 We then traveled to Oak Shelter, a third center which accepts women who have been heavily abused by their husbands in every possible manner.  Many have small children with them.  They have fled situations in which their lives were at danger, and were desperate to escape the trauma.

Psychological work with these victims is a high priority.  Since many of these women are migrants and not refugees, the range of other services available to them is limited.

Complicating their situations is that separation and divorce are handled by Religious Courts, usually following Sharia law, not civil laws.  Their choices are greatly limited by those Courts.

Once again, the presence and services of CRS and Caritas Lebanon are the only such services for women caught up in this manner of abuse.

[For more information on the wonderful work of CRS, visit:   www.crs.org ]
Posted by Cardinal Roger M. Mahony: at 9:44 PM