I am grateful that U.S. District Court Judge Susan Bolton ruled today that the most egregious sections of the Arizona Senate Bill 1070 were not allowable under Federal law and ordered those halted.

Recently I posted on my blog below an article entitled Common Ground for Immigration Reform? The article can be found at: http://cardinalrogermahonyblogsla.blogspot.com/
In that piece I share the results of many conversations with people over the past months about immigration reform. I was pleasantly surprised to discover that when presented with each of the elements of an all-inclusive immigration reform package, most Americans favored almost all of the separate elements.

I also recommend that those opposed to such all-inclusive immigration reform refrain from using the word “amnesty” to apply to a long, arduous, and costly process towards legal residence for those millions of people living in the shadows of our society.
Let us as fellow Americans now start in earnest our collective efforts to resolve the immigration issues which continue to surround us.
Posted by Cardinal Roger M. Mahony: at 12:05 PM


The recent enactment of Senate Bill 1070 in Arizona has rekindled the national debate on the status of immigrants in our country and drawn attention to the glaring gap in effective immigration regulation. 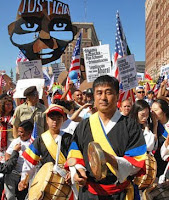  COUNTRY OF ORIGIN RESPONSIBILITIES The nations whose citizens must migrate to other countries for decent employment have the primary responsibility to provide economic development and decent job opportunities for their people. Too many national governments have simply not taken their responsibility seriously and have become part of the problem, rather than part of the solution. The majority of Americans want our government to pressure so-called “sending countries” to increase significantly their economic development at home. It is absurd for these sending countries to invest their scarce resources in more highly developed countries in order to earn a higher rate of return. Our country—the most powerful economically in this hemisphere and perhaps the world—must help bring this about through international economic policies which facilitate sustainable development in these sending countries.

 MORE SECURE BORDERS Of the individuals and groups with whom I have discussed immigration reform, nearly everyone believes that our Federal Government has not taken all of the steps possible to secure our national borders. However, we need to remember that there are five national borders, not one or two: the Canadian border [3,987 miles], the Mexican border [1,933 miles], the Pacific coast boarder, and the Atlantic coast border. Few people realize that our nation’s airports welcome countless visitors on visas, but these visitors never leave the country when their visas expire. The government estimates that of the 12 million people in our country without documents, a full 40% have come on visas and have never left. That’s almost 5 million people .

At the same time, we have spent over $100 million on immigration enforcement over the past ten years, yet the number of undocumented in our country has grown.
While almost everyone agrees that our borders must be made more secure, how does anyone secure 5,920 miles of open land border so that it cannot be crossed?
Take the border with Mexico, for example. If the government placed a border guard every 100 yards—the length of a football field—it would take 34,020 guards on duty 24/7 to keep an eye on that 100 yards. 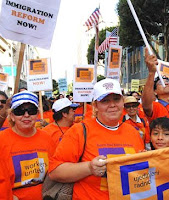 Part of the solution lies in immigration reform, which would increase the number of employment and family visas for unskilled workers, enabling them to migrate safely and legally through ports-of-entry. This would help reduce the number of those crossing the border, disrupt smuggling networks, and permit law enforcement to focus their time and resources on criminal elements . Comprehensive immigration reform would help us make our borders more secure, not less.

The long-term projections for our future workforce show clearly that with future economic growth, the lack of workers across the board will be heightened because of the babyboomers entering retirement by the thousands week after week.
Most people agree that there is not yet in place any workable system to handle the peaks and valleys of employment needs. What is needed is a program which allows unskilled workers to enter the country and work legally, based upon economic needs. Such a program must ensure that both the rights of United States and foreign-born workers are respected.

 AG JOBS There seems to be a greater consensus among members of Congress and the nation’s citizens that the agriculture industry has need of employees in various cycles: irrigation, pruning, harvesting, packing and shipping, and the like. Well over 50 % of farm workers in this country—those who pick the fruits and vegetables we eat every day—are undocumented. The Agricultural Jobs, Opportunity, and Benefits (Ag Jobs) portion of immigration reform, which would legalize farm workers and streamline their entrance into the country, could proceed forward quickly if there were the political will to make it happen.

 DREAM ACT The Dream Act would allow the children of undocumented immigrants who were brought here by their parents at an early age to enter colleges and universities, graduate, and become legal residents contributing to the well-being of our communities and nation. To deny these students this opportunity deprives the country of large numbers of skilled employees to meet our future workforce needs.
Again, the majority of people believe that children who were brought to our country by adults should not be penalized in their own education and their advancement for the betterment of our country.

PATH TOWARDS LEGAL RESIDENCY This is the one area of immigration reform which creates sharp divisions among us. Many contend that by allowing undocumented people to stay in this country and to start down a path to legal residency is nothing by “amnesty.” But what is being proposed is not amnesty. It is helpful to review the commonly held definitions of “amnesty”: “the act of an authority (as a government) by which pardon is granted to a large group of individuals;” “a general pardon for offenses, especially political offenses, against a government, often granted before any trial or conviction;” “an act of forgiveness for past offenses, especially to a class of persons as a whole;” “a forgetting or overlooking of any past offense.”

But none of us is proposing general pardon, forgetting, or overlooking of the past without penalty or stringent obligations. Immigrants here without permission would be required to pay for their transgression and “get right” with the law, then earn their way toward eventual citizenship. This is not amnesty.
What elements might make up a path towards legal residency?

• Register with the Federal Government. Each undocumented person would have to present himself/herself before the government, give their name, address, be fingerprinted, and be registered by the government. Each person would then be given a temporary entry-level residence card and would be placed in the back of the line for permanent residency, after those who have applied through the proper channels. This is not amnesty.

• Pay Fines After registering. Each person would be required to pay a fine because of their illegal entry into our country. This is not amnesty.

• Pay All Taxes. Each person would be required to compute, verify, and pay all taxes—such as Social Security—before proceeding down the path. This is not amnesty.

• Learn Conversational English. Each person would be required to begin learning and speaking English, and to be tested on their English proficiency. This is not amnesty.

• Time Frame Once all of these requirements are met, the person is given a longer residency status by the government, known as permanent residence status, or a “green card.” They would then, like other permanent residents, wait another five years to apply for citizenship. At that time, they would have to meet all the requirements of a United States citizen—English writing and reading proficiency, a knowledge of United States history, and other requirements. This is not amnesty. 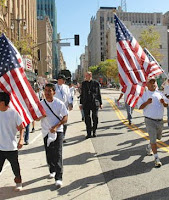 It is important to note that in all of the polls in the past several months, such as the polls taken by by USA Today, the Pew Research Institute, and the Pacific Institute of Public Policy, even those people who agree with the new strict Arizona law also believe that it is totally impractical to locate, detain, and deport some 12 million people from our country. The American spirit of welcome for immigrants seems to trump harsh and unrealistic solutions in dealing with undocumented people here.

The overall common good of our nation and its citizens demand early action on all-inclusive measures to repair our current unworkable immigration system. Each day that goes by without Congressional action, new and deeper levels of fear and desperation take a terrible toll on so many people living in the shadows of our society. There is general agreement among the American public as to the solution to our nation’s broken immigration system. Now our elected officials need to show the courage to enact it.

There is no excuse for inaction on what is perhaps the country’s most pressing social problem—all-inclusive immigration reform.
Posted by Cardinal Roger M. Mahony: at 2:47 PM