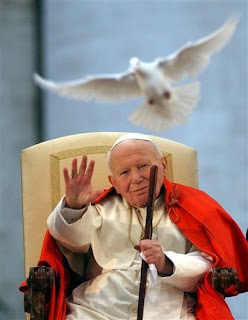 Over more than twenty-five years, Pope John Paul II taught us so many things: God's overwhelming love for us, the incredible gift of his Son, Jesus Christ, and the teachings of Jesus which the Church carries forward down through the ages. For all of his gifts as Pastor and as our Holy Father, we give thanks to God.

Having turned 75 just recently, I am now beginning to understand more deeply the frailty of our human bodies. I don't have the strength nor endurance of younger years. Our aging bodies put constraints on our activities and our yearnings.

But Pope John Paul taught us to keep moving forward with our eyes fixed on Jesus [Hebrews 12:2] and with a determination to live out God's will in our lives--regardless of the lessening of our physical and mental abilities. Our Holy Father gave clear witness to us that we should never give up, that we should strive daily to live our lives after the pattern of Jesus.

In addition, Pope John Paul bore serious and more debilitating illness in his later years. Yet, he never complained, never hesitated to accept his share in the sufferings of Jesus for the salvation of the world. He used every ounce of his limited energy to continue to serve God and to shepherd the entire Church.

For me, his Christian witness in the final few years of his life was more powerful than all of his world pastoral travels and brilliant writings. By remaining ever faithful to his life in Christ especially during those difficult final years of his journey Pope John Paul proclaimed his most eloquent and touching sermon.

This wondrous example of Blessed John Paul has direct appeal to millions of people around the world. With people living longer than in previous generations John Paul has become a beacon of hope to the elderly and those with diminishing bodily strength. He taught us to accept God's precious gift of life and to live each day as fully as we can through God's grace.

And with so many people suffering from illness, natural disasters, and the violence of wars, John Paul walks ahead of us--possibly at a slower pace--but with a keen sense of how much we are loved by God.

While I cherish the many photos of Pope John Paul celebrating Mass in the Los Angeles Coliseum and in Dodger Stadium in September of 1987, my most cherished pictures are of him stooped and slowly moving about because of age and illness. The strength of his virtuous life was so visible and easy to comprehend in those last years.

I recall visiting cancer patients during those final years of Blessed John Paul, and I would take along several pictures which showed him obviously ill. His acceptance of age and illness inspired so many who were suffering. Through his own living example he called so many to allow Christ the Healer to embrace them in their struggles and on their difficult journeys.

May Blessed John Paul continue to be an inspiration to all of us, but most especially, to us who are aging and enduring bodily sufferings.

May we always keep our eyes fixed on Jesus and live each day according to God's plan for each of us!
Posted by Cardinal Roger M. Mahony: at 3:10 PM

On Tuesday, April 19, President Barack Obama hosted an important meeting at the White House at which he gave a new commitment to use his office as President to help engage the American public in passing meaningful immigration reform in our country. I applaud the President for taking this step.

The Catholic Church in our country was well represented by Bishop John Wester, the Bishop of Salt Lake City. He emphasized that the President was the key person to help move needed legislation forward.

At that meeting the President reconfirmed his commitment to a comprehensive approach to immigration reform, and expressed his desire that such legislation move forward during the present Congressional year.

In order for immigration to reform to succeed in this Congress, however, depends entirely upon President Obama. His position of leadership is crucial and key to any next steps.

What is clear, though, is that the status quo of no reform is unacceptable. We have no meaningful programs in place to balance the needs for workers in many lower income jobs with the supply of those workers. Consequently, at our Southern Border we have a fence. And upon that fence are two signs. The first says HELP WANTED. And the one next to it says: NO TRESPASSING.

The President is the one person in our country who can begin to bring together a consensus on immigration reform. But we need to move beyond demagoguery and global assertions about various immigrant groups.

Businesses across the nation, both small and large, rely heavily upon immigrant workers to fill their jobs. The business community needs to step forward and offer its support to legislation which relieves business of unfair employee advantages.

All of our Faith Communities--Jewish, Muslim, and Christian--need to be part of a great coalition to work together for the rights of all immigrants in our country. All of us agree upon both the Scriptural foundations for the value of immigrants, as well as the values of each Faith Community for "the stranger in our midst."

The group most affected by our present situation are families. Most people are unaware that there is no such thing as a purely "illegal immgrant family". Rather, our immigrant families consist of members who are here with legal documents, and those who are not. We call these families "blended families". Obviously, these families are not going to volunteer to dissolve and have some members remain here while others return to their country of origin.

In the meantime, President Obama can take steps on his own to provide some relief to immigrant groups, and I encourage him to do so. He has the executive authority to use prosecutorial discretion to minimize the deportation of immigrants with long-time equities in our country, such as wthose with USA citizen children or DREAM Act students.

To date, the present Administration has deported more immigrants than the previous Administration, many of whom would benefit from a comprehensive immigration reform bill in Congress, which would provide a path towards full legal residence.

The present approach of President Obama sends a mixed message as to the priorities of the Administration.

Countless millions of us are at the ready to assist the President to meet his avowed commitment to comprehensive immigration reform. Now is the day, now is the hour!

President Obama, we all stand ready to join you as you lead our overall efforts forward on behalf of our immigrant peoples!!
Posted by Cardinal Roger M. Mahony: at 8:08 PM

After having met with students at Notre Dame University recently, I am more convinced than ever that our young adults on our Catholic colleges and universities are the ones to make immigration reform possible.

These young men and women truly "get it" when discussing immigration issues. Why? Because they actually know other college students like themselves who are unauthorized residents--young people brought to this country as minors, and who have worked hard to get a good college education. What's different? After graduation, these industrious college graduates cannot get a job that matches their education because they do not have resident documents.

Both Notre Dame University and De Paul University in Chicago are taking leadership roles in this effort. We will begin with a "Mid-west Circle" of some 63 Catholic colleges/universities in that circle, and gradually network the remaining 177 Catholic institutions.

Our focus will be almost entirely on the students at these campuses, and their suggestions will help create a Website, Facebook page, and other networking links among the 240 campuses.

Existing student campus organizations will be the ones approached first to see if immigration issues is a topic that falls under their umbrella of purpose and activities. It's always better to work with existing groups on campus rather than to create a new one.

One of the main tasks of the campus groups will be to help inform the other students about the various immigration issues. But these groups will also sponsor special Prayer Days for immigrants, forums to discuss the issues, and advocacy on local and federal legislation such as the DREAM Act.

The young men and women on our Catholic campuses of higher education will provide a Gospel-based wave of energy and enthusiasm to protect the rights of our immigrant brothers and sisters.

Jesus' words continue to call for our full response: "For I was a stranger and you welcomed me"! [Matthew 25:35]

Commentators on immigration and immigration reform issues offer various views on the chances of passing meaningful immigration legislation before the 2012 Presidential election.

I'm in the camp of those who believe that the possibilities of getting some immigration in the coming months and year are improving by the day. Three reasons give me hope: first, the nation's economy continues to improve. With an improving economy and the creation of many new jobs, people become less concerned about looking for scapegoats to explain the economic downturn. Back in December 2000 when the unemployment rate was 3.9%, no one raised any concern about immigrants--legal or not.

Second, the vast majority of American people realize we are an immigrant nation, and they are open to hearing and discussing reasonable solutions which both help our society to improve and our immigrants to come out of the shadows. All recent polls point to this encouraging feeling among Americans.

And third, with Hispanics now totalling some 50 million people, and with the high percentage of Hispanics under 21, political parties need to reach out to immigrants in a manner that is more just, fair, and realistic. Those younger Hispanics become voters, and political parties need to take steps which encourage membership in their parties. Harsh, repressive measures against "illegal aliens" make certain that Hispanics will join groups which support and assist them.

The relentless cry among so many that border security is the highest priority does not ring true. Our nation has spent billions of dollars on border security, taking unprecedented steps to secure all our borders. But total border security is impossible when two factors remain current: lower-income jobs need to be filled in our country, and the insatiable demand for illegal drugs on the part of our citizens.

Our national paradox remains: on the borders of our country we have erected two signs, about 100 feet apart. The first says HELP WANTED; and the second says NO TRESPASSING. We presently have no workable system to balance the demand and the supply for lower wage jobs.

I remain confident that the coming weeks could lead to some breakthroughs--maybe with the DREAM Act, or with AgJobs. Both make sense, and most Americans have common sense and the desire to take some positive steps to bring 11 million people out from the shadows.
Posted by Cardinal Roger M. Mahony: at 12:53 PM