On Wednesday, April 25, 2012, the U.S. Supreme Court heard oral arguments in the case Arizona v. United  States.  It was my privilege to be present for the entire time of the oral arguments.

The Justices did not seem to be persuaded that one part of the Arizona law violated Federal law:  the inquiry about immigration status after a person has been stopped for another violation of the law, and when there is "reasonable suspicion" that the person might not have legal residency.  It would seem that this section could survive.

However, questions by the Justices were presuming a quick check with the Federal data bases would be carried out, and that persons would not be held longer than for the original reason for the stop.

The Justices had far more serious questions about other sections of the Arizona law, especially those sections which make it a crime for an undocumented person to seek employment, to fail to register, or to take employment.  One will just have to wait until the Court decision to learn its scope and application for Arizona and for other States.

We must keep in mind that there are other challenges to Arizona's S.B. 1070 in the Federal courts--not on the grounds of the Federal government preempting State involvement in immigration issues, but rather, the great danger of ethnic and racial profiling because of the "reasonable suspicion" of not having legal residential status language.  Since the vast majority of people who will be questioned about their immigration status are dark-skinned or Hispanic, one can just imagine who will be checked.

Chief Justice John Roberts was well aware of this fact and that those issues may eventually come to the Court.  When Solicitor General Donald Verrilli began his oral argument, Chief Justice Roberts intervened at once:

"Before you get into what the case is about, I'd like to clear up at the outset what it's not about.  No part of your argument has to do with racial or ethnic profiling, does it?  I saw none of that in your brief."

This issue, however, is surely a major problem with the Arizona law.  Who else will law enforcement officers inquire about their legal residency status if not people of color, those who don't speak English well, and Hispanics?

But the Justices cannot be oblivious to the implications and practical effects of the Arizona law.  In my opinion, they simply must analyze the implications on individuals and their families when they render their final decision.

The Catholic Church will continue to stand with all of our immigrant brothers and sisters, regardless of legal residency, and will continue our efforts to extend earned paths to legal residency for all categories of these people.
Posted by Cardinal Roger M. Mahony: at 3:19 PM

The highlight of our Ad Limina Visit was our meeting with our Holy Father, Pope Benedict XVI, on Friday, April 20.
He received all of the Bishops from the Province of Los Angeles in his private study, and he was most welcoming. We were permitted to bring the five priests from Los Angeles—one working in the Vatican, Msgr. Larry Spiteri; and four doing graduate studies in Rome—Father Thinh Pham, Father Swalomir Szkredka, Father John Montejano, and Father Marco Durazo. They each met the Pope, had a photo taken, and then left the study.
Archbishop José Gomez introduced the Bishops of the Province, and each of us had a few minutes to focus on one aspect of our ministry in California and in our Archdiocese. The various types of ministry were covered by individual Bishops.

My report to the Holy Father centered on the issue of immigration and the current phenomenon of world-wide migration. Some 212 million people are on the move around the world, most of them fleeing various threats and deprivations: wars, terrorism, famine, political unrest, and the search for a place of peace and opportunity for their families.

I pointed out to the Holy Father that the last major Papal pronouncement on immigration was the Apostolic Constitution by Pope Pius XII, Exsul Familia, issued August 1, 1952—some 60 years ago. That document was issued following the Second World War and while the world was facing enormous displacement of peoples caused by that war.

I suggested to the Pope that it would be very opportune if he would consider issuing a new Papal document on the challenges facing today’s migrants around the world, and on the Church’s response to this phenomenon in our own time. He was most attentive, and asked me directly, “Do you have a proposal”? Fortunately, I had prepared a letter to him on this very issue and gave it to his secretary at our meeting.

I now plan to ask Cardinal Timothy Dolan, the President of the U.S. Bishops Conference, and Archbishop José Gomez, Chairman of the Committee on Migration and Refugees, to add their positive encouragement to our Holy Father as well.

Given the reality of so many immigrants in our country, and the Church’s continuing efforts to offer them various pastoral and spiritual services, it would be truly opportune to have our Holy Father give us an updated document on this most important pastoral work of our Church.

The Church’s deep concern for peoples on the move and for immigrants is a Gospel imperative for us in Jesus’ own words: “For I was a stranger, and you welcomed me”. (Matthew 25:35)

I am writing this blog post while flying home to Los Angeles, having been renewed and refreshed through our Masses at the four major Basilicas of Rome, through our personal time with the Successor of Peter, Pope Benedict, and through our conversations with so many heads of Vatican Offices.

May Saints Peter and Paul continue to inspire our Church and all of the Dioceses of our Region in the person of Jesus and with the fervor of the Holy Spirit !
Posted by Cardinal Roger M. Mahony: at 2:50 PM

The Bishops of the Provinces of Los Angeles and San Francisco begin their Ad Limina visit in Rome on April 15.

Every five years all Bishops are required to Rome to pray at the tombs of St. Peter and of St. Paul, to meet with the Pope, and to visit with the major offices of the Holy See. The name, Ad Limina, comes from the Latin expression "Ad Limina Apostolorum," or, "To the Doorposts of the Apostles." 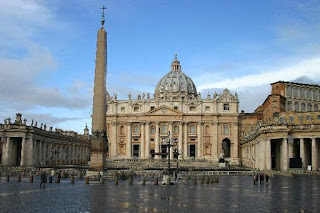 Each day we will celebrate Mass in one of the four major Basilicas of Rome: St. Peter's, St. Paul's Outside the Walls, St. John Lateran, and St. Mary Major. A visit with Pope Benedict XVI is part of the visit.

During these wonderful days in Rome, your Bishops will be praying for all of you, the faithful People of God in our various Archdioceses and Dioceses.

At each official visit we discuss in general our five-year Reports, and raise up issues for discussion. The atmosphere and dialogue are faith-filled, and we are able to receive helpful guidance in response to our questions.

This Ad Limina visit brought us to the offices of a new entity of the Holy See--the Pontifical Council for Promoting New Evangelization. Recall that Pope John Paul II had frequently mentioned a "new evangelization" in which each of us would deepen our personal encounter with Jesus Christ, share our faith journeys, and become a more welcoming Church.

With some 22 million inactive Catholics across our country, we need to be proactive in reaching out to them and in inviting them "home" to our Faith Community of Catholics.

A special Synod of Bishops on the New Evangelization will take place beginning this coming October, as well as the launching of The Year of Faith for the Church world-wide. Many new pastoral initiatives will be suggested this year for implementation at the Diocesan and parish levels.

Initiatives will be taken to enliven the faith-lives of our Catholic people, and to help them bring the values and imperatives of Jesus Christ in the Gospels to our daily lives. This is an exciting new chapter in the life of the Church, and I look forward with great eagerness to our new evangelization efforts.

May Saints Peter and Paul continue to intercede for us all!!
Posted by Cardinal Roger M. Mahony: at 1:30 PM

Currently, immediate relatives of U.S. citizens who have accrued a certain period of unlawful presence in the United States are barred from returning to the U.S. for as long as 3 or 10 years if they leave the country.

Immediate relatives can obtain a waiver of the unlawful presence bar if they show that a U.S. citizen spouse or parent will experience extreme hardship if they are required to remain outside the U.S. But in order to obtain the waiver, these individuals must depart the U.S. and wait abroad while the waiver is processed.

As a result, long years of separation keep families divided waiting while the various government processes churn on slowly. This is particularly difficult when very young or very old members of the family are involved in the process.

All individuals eligible for this streamlined process are still required to depart the U.S. and must meet all legal requirements for issuance of an immigrant visa and admission to the U.S.

Those who claim that this new process is some type of new "amnesty" are plain wrong. This new process is intended to hasten the steps for those family members who are clearly eligible for more rapid consideration of their petition. None of the steps in the process are being waived; rather, all of the elements are moved forward in a more certain way.

I support this new Rule and pray that after the 60 days for public comment it will be in effect.

Some estimates are that one million of the current 11 million unauthorized immigrants may be able to secure a more rapid path to legal residency.

This new process will help bring a large number of our residents out of the shadows and to give them a new future in our midst.
Posted by Cardinal Roger M. Mahony: at 7:25 PM