STATEMENT on the APPOINTMENT of
ARCHBISHOP JOSÉ H. GOMEZ
As COADJUTOR ARCHBISHOP of LOS ANGELES 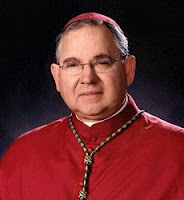 When our Apostolic Nuncio, Archbishop Pietro Sambi, informed me that our Holy Father, Pope Benedict XVI, had appointed Archbishop José Gomez to serve as the Coadjutor Archbishop of Los Angeles, I was so grateful to God for this gift of a Hispanic Archbishop.

I welcome Archbishop Gomez to the Archdiocese of Los Angeles with enthusiasm and personal excitement. The Auxiliary Bishops and I are looking forward to working closely with him over the coming months until he becomes the Archbishop early in 2011. 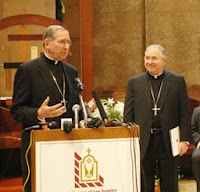 The first four Bishops of the Los Angeles territory were Hispanic Bishops[1], to be followed by five Bishops/Archbishops of Irish descent[2], and myself of German and Italian background[3].

I have known Archbishop Gomez since he became Auxiliary Bishop of Denver in 2001, and subsequently, the Archbishop of San Antonio in 2004. Over the years he has been a most effective leader working with priests serving the Spanish-speaking communities across the country, and his leadership in proclaiming the dignity and rights of our immigrant peoples has helped motivate many people to advocate for our immigrants.

Some may conclude that since Archbishop Gomez was ordained a priest of Opus Dei he must be “conservative.” In fact, these labels of “conservative” and “liberal” are really unhelpful in the life of the Church. We are all called to a deep relationship with Jesus Christ, and I can attest that both of us share a common commitment to Christ and to the Church, and that both of us are interested in promoting the teachings of the Church fully as well as bringing the words and example of Christ to today’s society and world. I consider ourselves to share an equal commitment to the continued growth of the Church here in Los Angeles.

Archbishop Gomez also shares with me a determined effort to make our Church safe for all people, but especially, for children and young people. I look forward to working closely with him to make certain that all our Safeguard the Children programs are fully implemented across the Archdiocese.

Our Archdiocesan Synod concluded in 2003 by establishing six Pastoral Initiatives, the first being a renewed sense of evangelization among our Catholic community. Archbishop Gomez recently wrote two important articles on this topic. The first was entitled Evangelization, Education and the Hispanic Catholic Future[4] in 2009. The second was entitled You Will Be My Witnesses: Pastoral Letter on Evangelization[5] issued in 2010. Both of these pastoral letters will apply well to the Local Church of Los Angeles, and place us on course for a more dynamic outreach to all peoples in the name of Jesus Christ.

During this Year for Priests, Archbishop Gomez published last fall a book entitled Men of Brave Heart: The Virtue of Courage in the Priestly Life.[6]

Archbishop Gomez is the Chair-elect of the Committee on Migrants and Refugee Services of the United States Conference of Catholic Bishops, and will take the leadership in moving the Church’s efforts forward to bring about a more comprehensive immigration reform in our Congress. I eagerly look forward to working directly with him on this important priority of the Church in our country.

There is an interesting link and bond between the Archdiocese of Los Angeles and the Archdiocese of San Antonio. In 1934, Father Robert E. Lucey of Los Angeles was consecrated as the Bishop of Amarillo, Texas. In 1940, Bishop Lucey became the Archbishop of San Antonio where he worked tirelessly on behalf of the poor and Hispanics. In 1953, a year before the Supreme Court ruling on desegregation in the public schools, Archbishop Lucey integrated all of the Catholic schools in his jurisdiction. He became the executive chairman of the Bishops’ Committee for the Spanish Speaking, and helped to focus the Church’s attention upon all of those immigrants across our country who needed the Church’s voice on their behalf.

To you, Archbishop Gomez, I not only extend the most warm and cordial bienvenida, but I also ask you to experience and appreciate the wonderful, dynamic Local Church of Los Angeles. As the Archdiocese of Los Angeles continues to grow over the coming year, it is our mutual challenge to deepen the faith life of all our Catholics and to assist them in witnessing their faith to all of their brothers and sisters.

I again welcome you with my eager enthusiasm as I complete my service as the Archbishop of Los Angeles in 2011, and you assume that role for the coming years.

Mass of Reception of the Coadjutor Archbishop: Wednesday, May 26, 2010, 2:00 PM in the Cathedral of Our Lady of the Angels

[6] Archbishop José Gomez, Men of Brave Heart: The Virtue of Courage in the Priestly Life (Huntington, IN: Our Sunday Visitor Press, 2009)
Posted by Cardinal Roger M. Mahony: at 6:18 AM