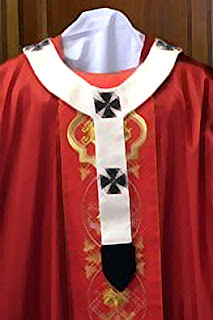 About 400 members of the Archdiocese of Los Angeles are en route to Rome for the bestowal of the Pallium upon Archbishop Jose H. Gomez, the Archbishop of Los Angeles, by Pope Benedict XVI on June 29, the feast of Saints Peter and Paul.

But what is the Pallium? It is a circular band about 2" wide, worn about the neck and having two pendants--one hanging down in front and one behind. It is worn over the chasuble at Mass. Every February two lambs are blessed each year and their white wool is used to make the Pallium. The wool is presented to the Pope, and Sisters then make the Pallium for the new Archbishops.

Interesting: even though Archbishop Gomez served as the Archbishop of San Antonio and wore the Pallium there, if he is transferred to a different Metropolitan Archdiocese, he is required to receive a new Pallium. The former Pallium is placed in his casket upon his death and Funeral Mass.

The new Palliums are solemnly blessed on the eve of the feast of Saints Peter and Paul, and are kept in a special silver-gilt container in front of the Main Altar in St. Peter's Basilica.

The use of the Pallium among Metropolitan Archbishops did not become general until the 9th century, when the obligation was laid upon all Metropolitans.

The obvious purpose of the Pallium was to link in a special way the Bishop of Rome with all of the Metropolitan Provinces throughout the world. The oath of allegiance to the Holy Father remains an important aspect of this impressive Ceremony.

As early as the 6th century, the Pallium was considered a liturgical vestment to be used only in the Church, and indeed only during Mass.

I received the Pallium on June 29, 1986. Upon my retirement on February 28, 2011, I no longer wear the Pallium. It has been placed in my crypt in the Cathedral, and will be worn over my vestments upon my Funeral Mass and burial.

All of us accompany Archbishop Gomez with prayer and fraternal support as he receives his Pallium on June 29! It is a privilege for so many of us to be in Rome for this wondrous Liturgy which links the Universal Church to the See of Peter in Rome.
Posted by Cardinal Roger M. Mahony: at 12:43 PM