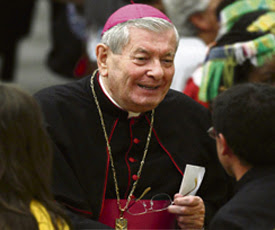 Pope Benedict XVI's personal representative to the United States, Archbishop Pietro Sambi, died on July 27. Archbishop Sambi had been our Apostolic Nuncio for some six years.

As soon as Archbishop Sambi arrived in our country, he began immediately to know the Church in the United States. He was filled with the love of God and the joy of Risen Life in Jesus Christ. Wherever he went around the country he brought enthusiasm, hope, and a deepened commitment to the Church.

His arrival here in the midst of the horrific clergy sexual abuse scandal showed his qualities of a good shepherd, and how he prayed and worked to bring about healing and reconciliation for all of us in the Church. When so many were discouraged because of the scandal, he brought a message of forgiveness and hope for those who had suffered, as well as a call for the entire Church to make the protection of children our highest priority.

His previous post was as the Apostolic Delegate to Jerusalem and Palestine, and he was keenly aware of the importance of the Christians living in the area of the Holy Lands. He made friends with the Jewish people, the Arabs, and the Palestinians in those lands, and his message was always one of healing and reconciliation among those peoples whose lives were shaped by Salvation History, especially the ministry of Jesus Christ in their midst.

Those of us involved in the Knights and Ladies of the Holy Sepulcher deeply appreciated his understanding of the important place in the world, and he was always supportive of our efforts to assist the peoples there.

All of us in the Archdiocese of Los Angeles are particularly grateful to Archbishop Sambi for his essential role in our Holy Father's appointment of Archbishop Jose H. Gomez to serve as our new Archbishop. We continue to thank God for the presence and the pastoral leadership of Archbishop Gomez in our midst.

Please keep Archbishop Sambi and his family in your prayers, and let us pray that his many virtues and qualities as a pastor will be a model for all of us as continue on our journeys towards the Kingdom of God.
Posted by Cardinal Roger M. Mahony: at 7:57 AM