In Erbil, Iraq now.  All of the persons on the move here are internal displaced persons, primarily Christians who have had to flee in face of ISIS assaults and their taking over large cities and towns, such as Mosul.  Erbil is about 225 miles north of Baghdad, and in the region controlled by the Kurds--called Kurdistan.

When ISIS started its aggressive assault in the northern part of Iraq, Christians began fleeing at once.  For a Christian to remain in their homes they would have to agree to pay a regular "fee" to remain, and would be subject to many harsh restrictions.  Almost all fled.

Some 13,000 families came to Erbil--a total of some 90,000 people.  They simply just showed up, and created an enormous humanitarian challenge.  This challenge was met at once by the Chaldean Archbishop of Erbil, Archbishop Bashar Warda--a dynamic man who quickly mobilized the Catholic community to help respond.  They at once opened camps and engaged the broader Catholic community to assist.  The response was overwhelming by the Church since the government was helpless to assume this burden of so many displaced persons.

Gradually the Archdiocese began finding permanent housing for these families, and today there are very few living in temporary quarters scattered all around Erbil.  It was surely one of the most amazing responses by the Church to such a challenge.

The Archdiocese opened 14 schools for the children, and 8,000 children are in those schools.

The view here is that ISIS will be defeated as an organized military fighting group, but that their ideology will continue to spread all around the world.  That is the greater threat by far.  The political problems in Iraq are huge, and the Iranian influence is very problematic.  The strong influence of the USA us needed to change dramatically the political deadlock in Baghdad.

At every turn CRS has been present with staff and funding.  The Archbishop reached out to many groups for assistance, and one of the most generous was the Knights of Columbus from the United States.  They have given over $5 million so far.


We drove north from Erbil and stopped along the way to visit a CRS school which assists internally displaced people [IDP], almost all from Mosul where ISIS had created so much murder and plunder. 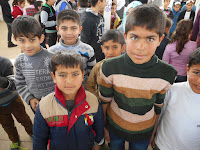 Several more photos from our visit to this school are shown below.  When asked what they want to be when they grow up, many students respond a teacher--because the most important people for them, the ones who have helped them the most, are teachers.  Most are young, energetic, and relate well to the children. 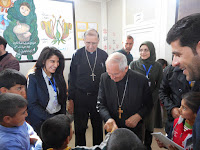 Archbishop Silvano Tomasi and I visit the various classrooms.  They are very curious about Americans, and they are most grateful to the Catholic Church, CRS, and Caritas Iraq for all of the assistance they have been receiving.