There is a unique phenomenon in Iraq which occurred following the USA invasion of Iraq.  Since the economy was beginning to improve, there was an enormous splurge of new houses all across Iraq--literally, hundreds of thousands of them. 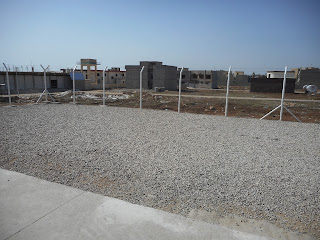 These houses were built from concrete and are very sturdy and structurally sound.  The intent of the owners was to make them two or three floors high in order to accommodate possibly more than one family.

And then came the Great Recession, and the rapid decline in the price of oil--one of Iraq's few natural resources.  All of a sudden the country is littered with all of these unfinished houses.  They are everywhere.

When ISIS began overtaking northwest Iraq, many thousands of families fled away from those zones of fighting and persecution.  Christians in particular were targeted and had to run for their lives.

Although most displaced persons began in camps, gradually ways were found to locate them in more permanent housing.  And one of those resources was the use of these unfinished houses.  CRS began working with the owners of the empty shells of houses, and arranged a contract whereby an Iraqi family could move into one of these houses.

The role of CRS became to add some of the missing items:  especially exterior doors and windows.  PVC material was used to fabricate inexpensive but sturdy doors and windows for these homes, and CRS had people install them.

Then, inexpensive interior doors were added to create privacy in the house, especially when there were two or three families living in one house.

Electrical power, water, and sanitary facilities were added for the comfort of the families.

Most of the new residents were able to remain for two years, but as those contracts end, many will be able to extend their stay.  These houses offer a dignified place for families to stay--away from the extreme winter and summer temperatures. 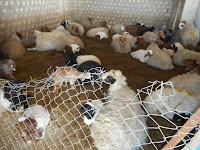 Even the family's sheep and lambs live on the lower level of the house. 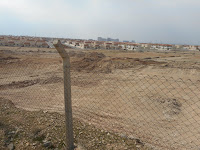 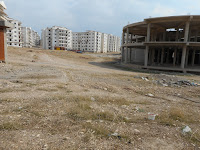 These unfinished structures are found all over Iraq, often financed by the wealthy Gulf States when the economy was robust in Iraq.  After the world-wide recession, these buildings now stand idle waiting for a future when they can be finished and occupied.  A few examples south of Erbil.

This program is being extended by CRS all across Iraq, and thousands of displaced families will be able to find a more permanent solution to being homeless.


[For more information on the wonderful work of CRS, visit:   www.crs.org ]
Posted by Cardinal Roger M. Mahony: at 10:57 AM