Today we met with five Iraqi Dominican Sisters who had been living and ministering to the peoples up in the northwest area of Iraq, the ancient Nineveh Plain area.  It would be roughly Mosul north.  Some 72 Dominican Sisters had been working in that area until ISIS swept down from Syria and began attacking people, especially Christians, and destroying their homes.  All had to flee quickly.

These Sisters had served both Christians and Muslims for many years, especially with education programs of all kinds.  Yet, when ISIS arrived, many of their Muslim friends and neighbors turn on them and all Christians living in the region.  The Sisters helped arrange rapidly escape caravans so that they could head south and out of the danger of being killed by ISIS.

These brave Sisters accompanied the people in the midst of their fright and panic, and served as guides and beacons of hope for them.  None of the Sisters are presently in the Mosul and northern regions, although the northern area have been liberated.  The Sisters are willing to return north as soon as the security is guaranteed for them and the residents to return safely.  No one wants to return prematurely and then have to leave in haste again.

The Sisters now have a convent south of Erbil and are working with Jesuit Refugee Services [JRS] priests and lay staff to assist the displaced persons from the north.  Pictured to the left is a role-playing theater class whereby they learn the skills to reconcile Muslims and Christians.  These young women are acting out a scene of healing and reconciliation.

The Sisters area also teaching the children their Catholic Faith, and preparing them for First Communion.  We attended one of their sessions as the children are practicing the prayers of their Chaldean Catholic Liturgy. 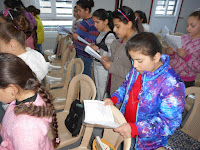 Training in marketable skills is another priority for JRS and CRS agencies.  Women are taught how to become beauty salon operators, and once they have completed their training, they are given a start-up kit with all the items necessary to begin hair styling.  They can then begin earning money for their families.

Similar courses are given for cooking and baking, and once they finish the course, they receive a mixer and tools needed to begin a career in cooking--eventually working for a restaurant or bakery, and then possibly opening their own shop.

Another course is in creative sewing, and when they finish, they receive a sewing machine so that they can begin at once to hone their skills at making clothes and other items for sale.

These projects are very similar to the livelihood projects we saw earlier in Jordan.

It continues to be encouraging to witness the hands-on programs of CRS and JRS, especially as they collaborate together to avoid overlap and duplication.

[For further information on the wonderful work of CRS and JRS, visit:   www.crs.org  and  http://en.jrs.net/about ]